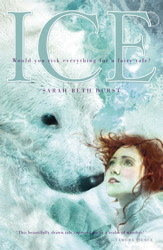 When Cassie was a little girl, her grandmother told her a fairy tale about her mother, who made a deal with the Polar Bear King and was swept away to the ends of the earth. Now that Cassie is older, she knows the story was a nice way of saying her mother had died. Cassie lives with her father at an Arctic research station, is determined to become a scientist, and has no time for make-believe.

Then, on her eighteenth birthday, Cassie comes face-to-face with a polar bear who speaks to her. He tells her that her mother is alive, imprisoned at the ends of the earth. And he can bring her back -- if Cassie will agree to be his bride.

That is the beginning of Cassie''s own real-life fairy tale, one that sends her on an unbelievable journey across the brutal Arctic, through the Canadian boreal forest, and on the back of the North Wind to the land east of the sun and west of the moon. Before it is over, the world she knows will be swept away, and everything she holds dear will be taken from her -- until she discovers the true meaning of love and family in the magical realm of Ice.

What a captivating, magical tale! I loved it! Ice was a truly unique story that was vastly different from anything I've read in a very long time. It was a perfect 'bed time' story, full of adventure, romance, and wonderfully unusual characters. In fact, the novel starts out with a story that Cassie's grandmother tells her each night, a story of her mother and the polar bear king. What she believes is only a fairy tale meant to comfort her becomes more real than she could have ever imagined.

The adventure is fast paced, with something happening on every page. The reader travels along with Cassie through the Arctic and Durst's gift for description allows you to feel her exhaustion and frustration. I read this book wrapped in a blanket, because I swear sometimes I could actually feel the biting cold!

I was unsure of how the author was going to pull off a romantic storyline between Cassie and the polar bear king, but I fell for it hook, line, and sinker. Their fondness for one another was believable, and sweet. In the end, I was sad to see them go. I wanted more from their story.

I give this novel two thumbs up, and recommend it to anyone who enjoys an epic adventure with a touch of sweet romance.